There is no sales tax in Oregon. There is also very little work available. There are a plenitude of trees, from old growth groves in rainforests to city streets lines. There is also a ton of clear cutting. The east is a massive, largely flat desert. The Cascade Mountains cut through the center, and the coast is a daily downpour interspersed by big blue sunny skies. Highway 101 is as thick with hitchhikers as nearly every downtown is packed with cyclists. Every inch of the beach is public land. You can get great craft beers from the tiniest, dirtiest gas stations. Marijuana is basically legal, despite last year’s down vote to actually making that a fact. There are plenty of republicans, despite the generally liberal views the state seems to portray. Perhaps ironically, these folks are among Oregon’s poorest residents, while their more progressive fellows are making due with simpler living. Organic milk is everywhere. Housing developments are more an more common. Nature is largely left in tact, beautiful rivers and snow covered mountains and shrubby deserts alike. Many of my oldest friends live here, good people who’ve been looking for home for years and years, choosing Oregon over Colorado, Washington and California. Oregonians hate Californians for coming here and ruining it all. But those particular Oregonians aren’t usually even natives…they’re from California themselves.

I don’t know of a single other state that is as diverse in people and environment as the Beaver State. I have never been anywhere else where state park campgrounds and trailheads are packed at 9am on a Tuesday morning. Our second son was born here. I’ve lived here for a few months at a time, in various corners of the state, and have rarely been disappointed with my surroundings. Sure, Lincoln City might be a drag, but from Astoria to Bend, Portland to Bandon, I’m invite with this state.

A brief look back at over five years of location independence. 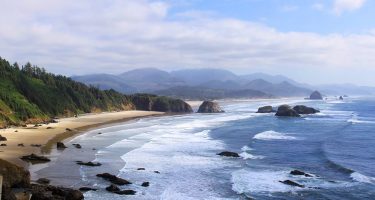 Peter Pan’s Neverland lives on in the Pacific Northwest