Everyone’s mother will tell you, hitchhiking is extremely dangerous.

Then again, they don’t call them old wives tales for nothing. Rumor, fear and hearsay has long outweighed the significance of fact; when it comes to anything even remotely dangerous, we as a society tend to err not only on the side of caution, but so far to the side we might not even be considered in the same state.

Today we present to you as many of the facts, as succinctly as possible, on hitchhiking which we could find, to help perhaps shed some light on the subject, but more importantly, in an effort to possibly help the revival of this old-as-man method of travel. 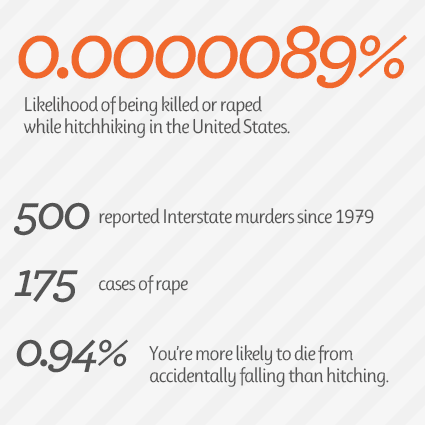 Let’s Cut to the Chase: is Hitchhiking Dangerous?

The short answer is, “Considerably less than we’ve been told.” Specific information is incredibly difficult to find easily, perhaps because the drastically low number of incidents doesn’t warrant such a study. We’ve dug deep though, and these are our findings.

While any amount of rape or murder is abhorred, that number is ridiculously low in the grand scheme of your likelihood to run into major trouble while hitchhiking. Especially when you consider what percentage of that would have nothing to do with hitchhiking at all. You can be murdered somewhere, thrown into the trunk of a car, and dropped off on the side of a lonely highway, but that in no way indicates that you were hitchhiking when the tragedy began. Again, the numbers are difficult to pin down, but we do have some data.

Perhaps you find that data a bit concerning, there are a number of factors left to the unknown. Agreed, the numbers above provide plenty of room for skeptics to reason why travelers in the United States should keep their thumbs in their pockets and look for other modes of transport.

We’ll then present you a much clearer set of data.

What can we draw from this then, even if we conclude that the remaining 90% of murder victims were all, which of course we know to be false, related to hitchhiking?

When you really consider what small fraction of that 90% of murder victims actually would involve hitchhiking, you start to see how ridiculous the claims of it’s dangers are.

In an admittedly very outdated study (circa 1974), the State of California did an extensive, six month study on the safety of hitchhikers. The study5 looked at both crimes and accidents, both riders and drivers. Here’s what it found:

Jo Magpie is our “resident” hitchhiking writer here at Wand’rly. She’s been to over 30 countries, mostly around Europe, in the past 10 years, and writes about it via her blog here, the Rising Road.

The study clearly shows that hitchhiking (again at 0.63% of all crimes in the state at the time) was barely a factor, and certainly not disproportionate to other activities such as walking down the street or visiting a convenience store. Consider further that “not having identification” and smoking marijuana were among these crimes, and that number shrinks hilariously. It is estimated that the number of hitchhiking trips in the time period of the study was in the millions, though the exact number is only an estimate.

When you exclude robberies, and given that there were no murders during the study, you’re left with rape. There is nothing in the study that in any way indicates that a woman’s chances of being raped are increased by hitchhiking, as these cases were a minute fraction of all of the sexual assault cases in California at the time.

At worst, hitchhiking is no more dangerous than any other activity in the country. Despite close-minded, government-produced documentaries and Internet trolls, the data just isn’t there to prove the tales of horror. On the other hand, it’s a free means of transportation. It’s a great way to meet others, open your horizons up both literally and with regards to communication skills. You might find a shortcut or two, or you might stand around in the rain for an hour, but either way, it’s an adventure.

As with any activity, use your brain. Hitchhike during the day, especially the early morning. If you’re a woman, try and take lifts from other women. You’re under no obligation to accept a ride from someone you don’t feel comfortable with. Be aware that crime rates in the South are generally higher than other regions. But don’t forfeit an entire experience simply out of fear.

How to Get Rid of Your Stuff 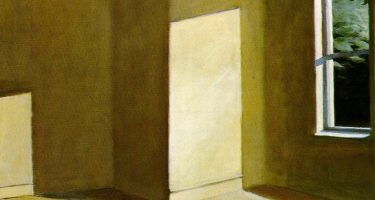 A short tutorial on how to rid yourself of all of the stuff, aka junk, that one can accumulate over years spent living in a stick house, with the ultimate goal being to hit the road full-time. 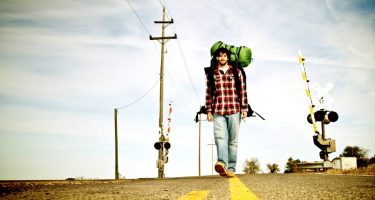 The realities of hitchhiking this beautiful, well traveled route. Spoiler: it's safe!