You’re toying with the notion of living in an RV or van, traveling the nation full-time, living the dream…but you want to know how much it’s going to cost.

If you’re tired of vague notions of what it might cost, if you’ve gone through endless bloggers’ monthly spreadsheets and still aren’t sure where to land, fear no more.

When it comes to the specific price of what RV camping fees cost, on a nightly average–all across the United States–we’ve got you covered. We scoured the available data via hundreds of reviews on the best campground review site in the world–Campendium–only to compile everything you’ll need to know when it comes to the average cost of an RV park per night. Across the country, by state, and what the numbers mean, ready for your perusal. Without further ado, here’s the short and sweet (but be sure to read on for stats based on private RV parks vs. public land, free camping, and state by state breakdowns, too).

If you’d like to know why and how you can significantly decrease that number–or jack up the price if you should so choose–we’ll explain it all, right now.

All things equal, if you spend your time evenly in private RV parks, public lands and take advantage of free camping, you can expect to pay $29.12 per night. That’s $10,629 / year.

Well, at first glance, it seems that if you wanted to live full-time in an RV or van, and were choosing to do so only at privately owned RV parks, you’d pay a little over $14,000 per year in rent. Should you choose to only stay on public lands–national parks and forests, state parks, and the like–your rent would be closer to $8100.

It’s not quite that simple though. Let’s dig deeper.

Defining Private vs. Public, and Where Does Free Come in to Play?

Now that we’ve got the raw data, let’s dig a little deeper. First, let’s define what each term on the map means.

If You Stay Exclusively in Private RV Parks

This number is lower than in our graphic, as it takes into account weekly discounts. Results may vary.

An “RV Park” is defined as a privately owned campground. They typically have full hookups, i.e. water, electric and sewage. They’ll usually come with a shower, and possibly other amenities such as a pool, small store or even a golf course. The spots are generally much smaller and less scenic than public campgrounds. On the other hand, you can often rent RV parks by the week or month and save more money than you would if you just paid the nightly rate.

Most RV Parks offer at least one night free if you stay for an entire week, so if we take that into account, the annual rent for staying exclusively in RV Parks drops from $14k to just over $12,000. Or, $1000 / month (and that will usually include your electric, water and sewage costs, as these are usually part of the nightly or weekly rental).

If You Stay Exclusively in Public Campgrounds

Note that very few public campgrounds permit stays longer than 14 days, so monthly stays are not only nearly impossible to find, but discounts for these longer term stays are virtually non-existent. Still, it’s a cheaper way to go than RV parks.

“Public campgrounds”, for our purposes here, are anything that is owned by a local, state or federal government. They include national parks, national forests, BLM land (Bureau of Land Management), state parks and other state-owned lands, or even county and city parks. They are often more scenic, with regards to both the immediate campsite and the surrounding area. They typically have less amenities, and while some will have water and electric hookups, firepits and picnic tables, many will have no services. Some may have vault toilets while others provide showers and running water in general, while others will be nothing but open desert. They typically have a maximum number of nights you can stay, around 14 in most cases, and rarely is a discount provided for staying multiple nights.

Unlike private RV Parks, public lands rarely offer a discount for staying multiple days, and so the average annual cost doesn’t drop, and you could budget around $675 / month for rent. Note that this doesn’t include the initial costs for a solar system or generator (or both) that you’ll likely require, or the recurring cost of gas should you choose to opt for a generator. We mention this, because when comparing private to public, it’s essential to get a full picture.

Oh, and you’ll likely require some type of propane, which isn’t included in any of these estimations (just as we don’t include gas, food, or anything else that’s irrelevant to the grand scheme of “RV rent”).

Where “Free” Comes Into the Picture

“Free” is defined as a place you pay nothing for camping, and is typically owned by a government entity of some sort. It does not include, for example, places where a membership–such as with Thousand Trails–might get you a free night because you’ve paid an annual membership due. It does, however, include public lands such as those in Washington and Oregon where the camping is free, but access to the land requires a permit, or New Mexico, where the purchase of a state parks pass and the amenities you choose affects whether or not you get a free campsite for the night. This is because said passes are required to visit these lands anyway, so the benefit towards camping is just a bonus.

On the map above, we calculate the average nightly cost of any given campsite based on this formula (sexy, we know):

Let’s take the Southwest for example.

If you spend half of your nights in private RV Parks, and the other half camping on public land, that would average out to $28 per night in camping fees, not including any discounts you might receive from the private RV Parks.

Even with California included (arguably one of the most expensive places for camping), that still puts the Southwest at the cheapest place to camp in this scenario. The region also has the most free camping, with 17% of the places you can possibly find a place to call home charging nothing at all. So, we give the Southwest a 17% discount.

We’re keeping things as simple as possible. Few people who prefer free camping spend many nights at all in private RV parks. Full-timers know that, unless you just love the amenities, it’s thriftier to combine all three, with RV Parks being a luxury and free camping more work.

So if we’re basing this on 50% of paid camping spent in both public and private campgrounds, we should also accept that it’s easier to stay on free lands in places with more free camping.

Thus, the map was born.

You Get What You Pay For

There is something to be said for value. The numbers in this article do not reflect how beautiful any given state’s campgrounds are, or anything else about the “quality”. We’re simply talking numbers here. Where we have particular opinions about a particular state, we’ll share them briefly before their charts below.

Although numbers are facts, there is a quantitative value that can be placed on personal opinion. While we neither desire to impress upon you our opinions nor ask you to even take them into consideration while perusing this information, we can say a few things with certainty.

If you love your mother, perhaps the state she lives in will be infinitely more interesting to you than another, equally equipped one.

If you have particular activities you enjoy, certain types of climates, or merely a propensity for specific cuisines, you may rate particular states much higher in value than the numbers show above.

Additionally, the cost of RV parks or campgrounds is not the only indication of how expensive this life can be. Consider the foodie who enjoys eating out twice a day vs. the fisherman who’s happy to catch the majority of his dinners. The price of gas in California vs. Florida makes a world of a difference. While these numbers show an average cost based on the factors listed above, we have personally spent less than $200 / month for rent living on BLM land in California’s Eastern Sierras, for example. 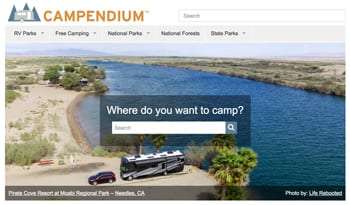 Whether you’re the world’s most glamporous camper or just want the bare essentials, find the perfect campsite for you at Campendium.com

Your propensity for thriftiness, where you want to go, and what you’re willing to sacrifice (or not) in order to meet any budget are completely up to you. That’s one of the major perks of this life, it fits any budget, as long as you’re willing to take on more of life’s “conveniences” as work you do yourself (think $5 lattes vs. owning your own French Press at home and sipping $0.25 cups all the day long).

However you choose to travel, though, welcome to the road!

The following may be interesting to those stat geeks out there who’ve made it this far.