Well sure, as every “real” traveler will tell you, not to mention the locals still disillusioned by their choice to purchase a hippy shack twenty seven years ago, Sedona has become a trap no tourist can seem to outsmart. Non-accurately-statistically speaking, the place must be at least 90% strip mall, though to be truthfully favorable a good majority of this strip is locally-owned business, but nevertheless, upon rolling into Sedona from the more southern, more Cottonwood-hence direction, you feel the weight of a non-community oriented, non-walkable, strip mall. The McDonalds in town, however, authentically glows its golden arches in blue. Nothing says Arizona like turquoise.

But Sedona’s beauty doesn’t seem to fall into the confines of the town that has risen up around those great red rocks. No, Sedona should be a reference not to the bland old downtown and the aforementioned long concrete sea of a parking lot, but instead to the still very much surviving park full of trails winding through expanses of this gorgeous shades-of-red rock semi-wilderness outside of the city limits. In my opinion, even given the proximity to a Mickey D’s, this place should be a National Park. And I don’t throw that term around casually, but the two trails we had the time to meander about were so gorgeous natural and wild, with egg shell mountain top peaks and the type of calming effortless hiking that can only come form a place Mother Earth seems to bare her sole from within, that why they don’t level the town into a nice little horse trail and claim the place as the southwest’s trippiest O2 levels truly might make you wander.

The ol’ pup Deputy had other words, however. Fresh from losing his doggy do-dads in the likely ridiculousness of fulfilling Bob Barker’s anti-Germanic shepherding (and to be fair, all animals of the kitten- and puppy-producing strain), the good dog walked along the easy and flat red dust coated trail, slipping slidely over smooth powdered boulders and attempting his best to avoid contracting the variety of spurs any Arizonan desert dog should be adept at meandering through, by the time we’d reached the almost-end-of-the-trail, it was evident Dep would not, in fact, be making the trip on his own. There was a brief moment of me carrying the poor guy the few last several hundred feet that he decided, in fact, that being carried by a grown man–a nearly grown pup himself, though still a pup, to be sure–was not how he’d like to be seen here, still in his home state.

So there it was that a few good less-than-a-miles later we found ourself staring at the Bus coming over the park’s horizon and all loaded up, ready and happily easy to find ourselves dreaming of a tomorrow’s adventure, perhaps a little more Flagstaff. 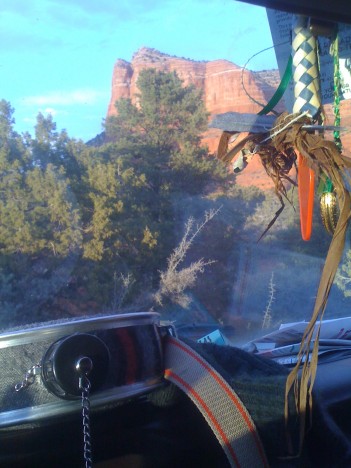