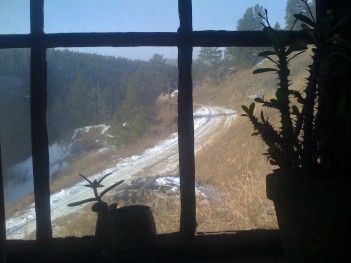 A roundabout, two gas stations, a pretty typical Main Street in TouristTown–full of the usual bakeries, bars and bistros, but this is Colorado (and this is Nederland) so there are legal medical marijuana dispensaries as well, which are more high end boutique (mixed with dancing Jerry bears) than clinical pharmacy–and an outdoor mall area housing a pizza shop, the Best Western I first stayed in when I moved here, a locally owned grocer and a coffee shop in a train car. This is the little mountain town she lives in, where she lured me up into and where I couldn’t help but be returning to now, after having come and gone on the back of a powder blue scooter ridden down out of the Rockies, after having returned three days later, having bought the beautiful Bus that I call my home and which we jaunted Westerly in together, crossing Utah, Nevada, and up and down the California coast together in under sunsets struck matchfire in a cave, as though they were the most brilliant light that could ever coast out of the sky and pepper down over our forward momentum like some childlike dream of showering in gumballs, blowing a bubble so large and sugar smacking lips tasty that no amount of it snapping back over your face wouldn’t have been worth the feat.

After having returned from our galavanting ’round California, Tahoe and Halloween the past weekend away, and a long haul up I-70, I sat in a park and ride lot in Nederland on a Friday night, encased by the Bus and nothing much more to separate me from the salt shaker snow that was flake by flaking up around our outsides. The Lady had invited me to her place of business, a diner that could have fit in just about any town, anywhere save for the dreadlocks dripping from cooks and waitresses alike, and while Cincinnati Bengals and Pittsburgh Steelers sports regalia hung from the walls of the place and tuna fish salad and burgers and fries and ketchup bottles, mustard bottles, salt and pepper, PBRs and Bud Lights abounded, the staff kept the Greatful Dead in the air and as I found this town to be abundant of, the usual was slightly askew in the place. I sipped my Jameson and waited for 7pm.

I arrived before her–she worked behind the bar, busy and barely speaking to me but taking the time when she would and could, so I mingled a little and danced even less, annoyed some locals and was back on my way–but not before she pulled me from the crowd for a quick errand across town to pick up some cups or paper plates or something. Fifteen minutes of driving across this two mile town and holding hands and laughing and this, the first time we’d seen one another since that San Francisco airport…

For the next week, some nights I would stay in the Bus, some nights I would sleep with her in the log cabin she was staying in with a friend. A friend who would come home late nights with her boyfriend, high on mushrooms and packed full of the giggles and we’d all mix up the mingling until everyone else was asleep but the Lady and I, on a pillow tucked in close to the pot belly stove of a fire in the corner of the room. She wobbled in the air, drunk on Stones, like a skyscraper ready to tip. I smiled and was happy to be the ocean that all of those stories would fall into.

Late one night, as she and her psychedelically induced roommate had assured me would happen, through my somewhat groggy eyes, I saw through the sliding glass doors that portcullised out onto the wooden deck which overlooked the dirt road leading down through the mountains and back into town none other than the most regal, proud and postured little creature, red and silver hair keeping it from the cold, pointed straight up ears and slits for eyes staring into the heat of the house. It was a fox, no not just a fox, the Fox, one which apparently came with the house, the landlord having asked them to continue feeding it–right or wrong, nature or not–and they did, cat food I believe, and so here it was, at some 2:37am, staring back into civilization as it was as close to humanity as a wild animal can get without thousands of years of being bread for captivity. I looked at Fox, bundled up in his winter coat, tail wrapped around his four paws like the layers of blankets I kept in the Bus for the longer, lonelier nights, and how his eyes were squinting so tight but open just enough to see the world the way he wanted to, and couldn’t help but feel a little kinship to the little carnivore.

The night went on, I back to sleep and the wildlife to wherever wildlife goes. Colorado doesn’t get dark at night with the snow coating under an open sky of moon and stars. It all just sort of glows slowly in through your windows to remind you that you’re taken care of.