I’m from Pennsylvania, and we have some of the weirdest laws when it comes to the purchasing and consumption of alcohol.

If you think your state is stranger, trust me: it’s not. Here’s how I was raised.

You can drink beer, liquor and wine in bars. Many, if not most, restaurants outside of larger cities don’t serve alcohol at all. Now, if you want to buy beer for your home, you’ve got some decisions to make. Do I want 12 or less beers, or 24 or more? You see, if you want to buy a case of beer, you’ve got to go to a special store called a distributor. Yeah, “distributor” as in the guys who sell large quantities of beer to the bars. If you want less than a case, you’ll need to buy it from a bar. That’s right, you go into a bar, tell them, “Two sixers of MGD please,” and they send you out the door with beer to go. Even at 2am. You can only take out two six packs at a time, firm. Try to buy three at once? No sale. Except that you can buy as much beer from a bar as you want, because you can go back in and buy two six packs over and over again until you’ve either run the bar dry, ran out of cash, or they refuse to sell you anymore (they may need some for the other guys after all). You can literally set your first two sixers outside of the door and go back in.

Now if you want wine or liquor to enjoy around the house, you’ve got to go to a specialty state store. Which don’t sell beer. No alcohol at all is sold in grocery stores or gas stations. Unless, of course, the gas station has a few tables and calls itself a restaurant, then you can buy and drink beer there or get it to go, two six packs at a time. Oh, and of course, you’re paying bar prices for sixers. Yeah, strange.

So imagine my surprise when, one night in Texas, I ordered a six pack around 11pm. They brought me six opened beers. “Hmm, I wanted to get these to go.” I was literally yelled at, like I was doing something wrong. And I was, in Texas.

With all of the massive confusion behind it all, we’ve gone ahead and created an app that will allow you to quickly select a state and determine what you can or can’t do. Hell, in some states you can even walk around town with an open beer, as long as you’re not drunk. In Nevada, in fact, it’s illegal for any town, county or other municipality to create a law banning open containers in the street. Go figure!

Alcohol Laws in the States App 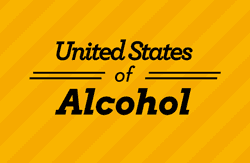 We’ve created a handy app that gives you quick access to alcohol laws in all 50 states.