The Black Hills of South Dakota rival most National Parks for beauty and variety, yet they are only currently defined as a National Forest.

Indeed, the Wind Cave National Park which butts up against Custer State Park, both of which are adjacent to some parts of the Black Hills National Forest, is perhaps less spectacular than the rest of the area as a whole. Let’s explore some of what this area has to offer.

Custer City, a small old western town gone tourist, where local businesses open for the summer to peddle animal skins and local beers to anyone willing to toss a few peanut shells onto the ground. As winter rolls in, the business owners and tourists, along with their money, leave town and behind them a cold, quiet winter.

In Custer State Park, cars cautiously wind their way up the Needles Highway, where pinnacles climb into the heavens and tunnels only barely wide enough for conversion vans to slip through.

A little further south, more cars slowly make their way around Wildlife Loop, SUVs and a herd of bison all moving along together, burros and foxes and coyotes and pronghorns all through the distance.

A cowboy poet named Badger Clark once roamed these lands, when even a small 1800s town like Deadwood was too civilized for his liking, painting pictures with prose of the land he adopted as home.

Sylvan Lake, where Crazy Horse had his vision quest which showed him the path for his future, rests sparkling beneath the summer sun, today a playground for swimmers leaping from rocks and climbers ascending them.

Grocery stores sell out of local Crow Peak 11th Hour IPA the same day it arrives, and every bar in town is proud to offer such a well crafted beer.

Sturgis, the famous motorcycle rally location, sits longing for its rootsy past and embarrassed of what it’s become today. Once, I assume, a rough and tumble little Wild West town where men of questionable intentions and blurring tattoos drank beers and fought wars, it is now little more than one massive t-shirt outlet.

A trail leads up a steep hill, through a graveyard where legends such as Wild Bill Hickok and Calamity Jane are buried, to a lone grave, that of Sheriff Seth Bullock. All characters from history and perhaps most recently made famous by the HBO series named for the town they rest forever in, Deadwood, South Dakota.

Deadwood’s Main Street has certainly seen its share of tourism takeover, but still holds an Old West authenticity which puts it somewhere higher in the world of “real towns” than its now laughable neighbor, Sturgis.

Finally, at the northwest corner of the Black Hills, Spearfish–home to that Crow Peak IPA aforementioned–struggles to hold onto the quaint charms of its small town, local nature and the ever impending threat of transforming completely into a strip mall.

The Black Hills can be see in a day, and never fully explored in a lifetime. While summertime offers the full assortment of recreation described here, I believe winter–for those hardy enough to withstand the weather, seasonal economic downturn, and likely requirements to sneak into many of these closed-for-snow areas–would be the more extraordinary experience.

We blog about the weeks we spent living in the Black Hills. A few times, actually.

Tidbits of our month long stay in Terlingua, Texas, living and working for the Las Ruinas Camping Hostel. 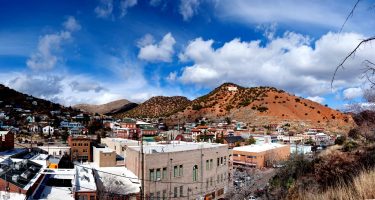