A trail leads to a shrine at the 5900′ summit of the mountain which makes up the northeastern slope of Bisbee, Arizona.

We had taken the trail before though, walking passed the bars and galleries of Brewery Gulch, up the stairs beyond Mimosa Market, and into the desert where the terminus of OK Street almost hides the trail’s head. It’s a series of switchbacks and multiple routes formed over time by hikers uncertain as to which bits of rocky sand were trail and which were simply shortcut. Today though, my dear Lady and I were seeking adventure.

Like many ex-mining Arizona mountain towns, Bisbee wears a giant white letter on the side of one of its cliffs. A massive white “B” made of painted rocks lives on the cliff directly west of town, proclaiming the town below by initial from around 5800′ above sea level. That was our destination, and we had covered enough of the Mule Mountains to know that we could almost certainly ascend straight up to find ourselves in one of the two loops that made up the letter.

From stairs leading up on the south end of the Eldorado Suites, we wound our way into the mountainside neighborhood, eventually coming to a sign pointing the way to the market, Katmandu, and the “Big B”. That was our destination, so to the right we veered. After that sign, however, there is not much in the way of directional reassurance that we might be straying in generally the right direction. Once embedded into the side of the cliff, the “B” could no longer be seen. At one point a small sign did read something about “o Tresp sing”, but we ignored its almost positively clear message and meandered on. We passed a mattress living in a small cave. A tiny goat ran down the mountain several yards ahead of us. We continued on, until it was apparent that the path had long ago ceased to find itself under our feet and we were completely trailblazing our way to who knows where. 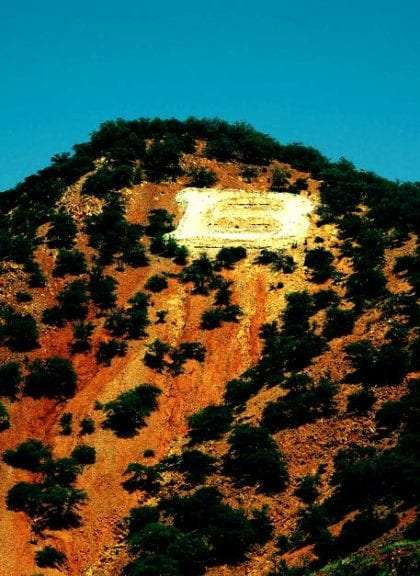 So, I looked up. “It must be up there,” I presented it as more of a question than a statement of fact.

“You think?” she replied. The side of the Mule Mountains is often made of a mixture of red and tan rocks that slip beneath your feet with every step, making climbing them directly upward a dangerous and difficult task. Here though, runoff from the mountain had carved out what could only be described as a natural mountain stairway. God’s steps, perhaps. Without much more of a debate on the issue we began our climb. It was as though the mountain had formed step after step for us, our feet feeling firm and planted with each new foot of ascension. The red of the rock wore off on the palms of my hands. My back expelled salt and sweat perhaps enough to fill a bowl that the people, small as ants below, could call an newly formed ocean. At one point a small brass bell sat on one of the stony steps. I left it, however it had become here, that’s how it would stay. I looked over my shoulder now and then to ascertain the Lady’s status, her ability to follow my hot pursuit of surmounting this climb. She was hot on my tail, likely without me in her way she would have gone even faster, I thought, and also considered the possibility that if she were to fall, some possibility that I could grab her and prevent a full descent caused me to swing over to the right of the increasingly more vertical climb and allow her to pass. I watched as she and her Ugg boots passed me, and took off into the sky. 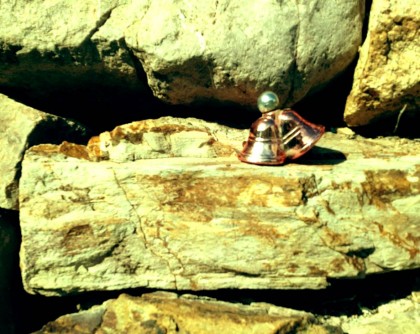 We weren’t even positive that we were heading directly for the “B”, but as the craggy stairs gave way to a less steep, more loose rock covered ground and we got back up on two feet and walking properly, there it was, displayed before us like a rest stop along the highway. We sat in the middle of the top of it, smoked a cigarette each and looked back at our accomplishment. Bisbee itself could have been an ant farm, captured in glass or playing on a television for us to watch. That was not part of our world, we were above that reality, we had ascended into a a place where only she and I existed and as we put our cigarettes out I rolled her over and we tossed in the rays that blanket Children of the sun.

Above the “B”, as we came to found after playing minotaurs and ducking under, through and between manzano trees to truly reach the summit, a trail leads around the entire town’s mountain tops. We followed it for some time, in the general direction of the cross and altar we’d visited times before.

“A local guy in town here, some years back,” a man told us over drinks on the Copper Queen Hotel’s porch a few days earlier, “his son was sick and he promised to make a shrine to him if he passed away. So when his son died, even in his grief he began carrying the supplies up the mountain, a donkey to carry the heavy stuff he used to lay the cement to make the main cross and altar and all of that painted white stuff you see up there.” What came of it all was a large cross at the summit of the mountain which you can see by looking north by northwest from the end of OK Street. The cross is perched atop an altar with various built in shelves and compartments. Over the years others have added statues of Mary or beads or toy cars. This is where the Lady and I ended up after up and downing the various dips in the trail that circles the rim. As town below went on its merry way, oblivious to our pursuits, I carved a heart with the words “Love is Renée” into an old white bench.

Some years later she and I would revisit Bisbee for their annual New Years Eve celebration. We hiked back to the cross and found that same bench, and as she sat down to rest after the climb, I produced a small ring, a Bisbee Blue turquoise stone its only adornment, and slipped it around her finger, asking her to marry me. She covered her face, smiling so wide she nearly fell off the back of the bench, but when I grabbed her and pulled her back to seated safety, she uncovered her eyes and, after a long enough pause to stop a man’s heart in anticipation, kissed me with a “yes”.