It was the second day that I was hitchhiking in the Pakistani Thar desert with my armed guard Gulab.

The Thar region was well-known to be safe, but I knew I would be obliged to have an armed escort when traveling…

The day before I had trouble communicating what I meant with “hitchhiking”, but now he understood it immediately and voluntarily walked past the bus station to stand next to the tarmac with me. We got a lift in a jeep and I sat at the front. The views were amazing. The night before the landscape had been mostly flat, now there were dunes. Deserts were the thing I dreamt of as a child when I imagined traveling, and still now sand dunes turn me on even more than mountain ranges. A few of them slid past, the surface sleek as skin. At some point we had to stop. A huge dune had buried the road in front of us. Luckily, a way through had already been cleared, if only the width of one vehicle at a time. Just as we arrived at that spot, a colorfully decorated passenger bus came from the other side. It forcefully plowed through the loose ground, tossing up plumes of sand to both sides. On its roof a few extra travelers were squatting or sitting with their legs dangling, their faces half covered against the dust like Touaregs.

When we started the motor again and drove straight through the middle of the dune ourselves, I held my breath. My skin tingled. It was a surreal and exquisite experience to find myself in the middle of this narrow ravine, surrounded only by gleaming white sand.

This was the second time that I visited Pakistan. A local travel writer, Salman Rashid, helped me to get a permit to visit the Pakistani part of the Great Thar Desert, the entirety of which spans both Pakistan and India. It had piqued my interest because it was the last region of otherwise majoritarily Muslim Pakistan that still had a sizable minority of Hindus. They represent some 45% of the population. Locals are proud to announce that everyone lives in harmony and call Thar the most peaceful region of often troubled Pakistan.

Since 9/11 widened the rift between the western and the Islamic cultural spheres Pakistan has been very under-visited. When tourists come today, it is to travel overland to or from India or China. There is a clearly demarcated area in the north and middle of the country to which those travelers go and from which they almost never stray. The Thar region lies far from this beaten path in the south. When I got ready to go there, I was told the only other westerners ever visiting were NGO workers.

We decided together I would take a public bus and put on a black nighab… In this way I would not immediately be recognized as a foreigner.

In order to get to Thar I had to traverse a string of villages which over recent months had made news with kidnappings of local men by armed gangs. If they saw or heard of a European traversing their area, those gangs would see a golden opportunity to demand a huge ransom. The Thar region was well-known to be safe, but I knew I would be obliged to have an armed escort when traveling around in it. Ironically, on the way there I was left alone.

While still in Hyderabad, the city closest to Thar, my friends were advising me on what to do. The first idea was to pay a taxi and take a friend of a friend with a gun with me for protection. It was too expensive. Instead we decided together I would take a public bus and put on a black nighab, the Islamic garment that shows only the eyes. In this way I would not immediately be recognized as a foreigner. The whole night previous to departure I was nervous and slept badly. But the next day my friends made me feel better by taking pictures of me in the nighab, and escorting me to the bus station with a lot of laughter. It was oddly thrilling to go disguised like this.

I was also wearing black gloves, and for sure only the woman next to me on the bus…and the man I bought the ticket from realized I was white. However, I did not dare drinking water for hours. Since I was not used to wearing a nighab, I was afraid by lifting up the veil and bringing the bottle to my lips I would make it move and could not tuck it back into place afterwards. When going through the villages of which I had been warned, I pulled up the black piece of cloth that covered my nose and mouth and put it over my eyes as well. Pakistani women sometimes cover their whole face like this, although when they do it’s mostly outside against the heat or dust. Yet I did not want to take any chances. As soon as I knew we had arrived in “safe waters” I felt relief, pulled the veil from my face and finally dared to quench my thirst.

On the way back, I was going to hide under the same disguise again. By then I would be accustomed enough to the facial veil that I would actually dare drinking while wearing it.

On arrival in Mithi, the capital of the district of Thar, I was interviewed by local police. It went better than expected, the interview did not really take all that long. The next morning a young, friendly man in civil clothing came and asked me a few of the same questions. He did not introduce himself, but I took him to be from one of the intelligence services. After he left, I knew I could not go anywhere before my armed guard arrived. When he came, a machine gun flung over his shoulder, wearing a dark blue uniform, he introduced himself as Gulab. We did not have a language in common, and all I managed to find out about him was that he was Hindu and was married with three kids.

We set off. Already then I just wanted to walk along the road and flag down one of the few passing cars, but Gulab did not understand the concept of hitchhiking at all.

Initially at least I was forced to take public busses. This also proved to be an adventure, since the bus was crammed with a crowd of incredibly colorfully dressed locals and their sheep. The men wore turbans and the women flowing cherry red or emerald green dresses. They covered their heads and shoulders with heavily embroidered scarves, and they often had their ears and noses pierced with big gilded jewelry.

It was only towards the end of the day that I managed to get Gulab to hitchhike. We had arrived in the big village of Nangar Parkar. It was very picturesque, made up of low houses painted in bright colors and surrounded by camel herds roaming between red cliffs. The local police said I was not allowed to stay the night there, because my permit was only for certain towns. Luckily for me, there were no more busses out anymore, so the only option to get anywhere was indeed by hitchhiking.

Gulab and I stopped a lorry, one of those amazing, excessively ornamented lorries that are driven only in Pakistan. Many travellers who go to Pakistan dream about riding one once.

This particular truck had a windscreen but no side windows. It was in the winter, and the outside air was cool, yet we were kept blissfully warm by the heat radiated from the engine. I could only imagine what terrible heat the driver had to suffer in the summer. The missing side windows may have been the way the driver tried to remedy the fact that he did not have air conditioning in that old, beat up truck.

Ever so often we stopped and his assistant, a young man in a pakol hat, climbed out the window. He would claw his way along the side of the cabin towards the front, and while standing on the fender opened the engine bonnet to potter about underneath it.

It was easier to do things this way than to open the door, jump all the way down to the ground and then clamber up again at the front of the vehicle.

At some point we took on another hitchhiker, a local man on his way home from a family visit, as he said. To make space for him the assistant climbed out, over the roof of the lorry and back inside through the opposite window, all the while we continued to drive. We only went at 20 km/h anyway, those type of lorries usually cannot go any faster. By the time we got to the small town of Islamkot, where I was going to stay, it had been dark for a few hours.

Now, if I was a NGO lady used to going in hired jeeps, the episode with the lorry would surely have been one of the high points of my trip to the Thar desert.

But I’m a hitchhiker, so adventures are expected.

Hitchhiking to a War Zone

Jo and Hrach hitchhike into the war between Kurdish fighters and ISIS. 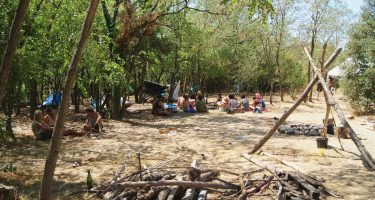 Jo revels in the sheer number of hitchhikers at the hitchgathering, and finds plenty of interesting women to interview for her upcoming book. 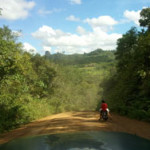 When Nina was 20 she hitchhiked across the Sahara dessert by herself
and she has never stopped since. By now she has travelled to over 70
countries. She has hitchhiked cargo ships in West Africa, canoes on
rivers with crocodiles in them on Borneo and has never shunned a few
hours' walk over the mountains or through the jungle if there was no
road. Many of her stories can be found on her blog which she has been writing for many
years.