Three years ago I picked up ‘On the Road’ by Jack Kerouac.

I quickly became enthralled in his story, particularly in the concept of a road trip. I had just started thinking about taking a gap year when I finished school, and this was the inspiration that sealed the decision: I would take a road trip across America.

It wasn’t just ‘On the Road’ that made me choose America as the destination for the road trip. For me, a big part of the trip was self-discovery. I was born in America but have lived most of my life abroad, predominately in England, and had never spent an extended period of time in America. I didn’t know what it was like to live in America, or to truly be American. I felt like I was ignoring a part of my identity, my heritage. I thought that if I saw America I could reconnect with that aspect of myself.

In the process of planning I pulled my boyfriend Karl along for the ride, and and in the beginning of March we flew into Philadelphia, bought a car and hit the road. At first, I was nervous and worried we had taken on too much, but quickly I fell in love with being on the road. I loved the movement, the ever-changing landscape, the breathtaking scenery, the people, and the next four months of travel flew by. In 5 months we saw 37 states (plus Canada), and travelled over 16,000 miles. At the start of the trip I had thought that when the end came we would be relieved, but it was the exact opposite. The longer we travelled the more we loved being on the road. I never wanted to stop, and if we’d had the chance I think we would’ve kept going.

The journey incited as many questions as it answered, but I did connect with a part of myself I thought I had lost. I have now put a face to the vast country that is America; it is beautiful and troubled and diverse and it is mine. Through our travels was able to find my place in the great tapestry of this country, and find it’s place in my life as well.

Our road trip changed me in many such ways, including that it incited what I like to call the ‘wander bug’ in me. I have only been back in England a few days and already I am itching to move, to travel. Now, when I look at my future, I see a life full of the unknown and unfamiliar, in which every day has a new horizon. I have even begun to look into living on the road full time, which is in fact what drew me to Wand’rly.

That is my story, or at least the beginning of it. 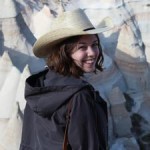 I am a mutt of sorts, American born but raised in Britain. This last year, on our gap year before university my boyfriend and I took a 5 month road trip around the US, seeing 37 states (plus parts of Canada) and discovering an addiction to life on the road in the process. Check out the Tarmaca Adventures and follow along on Instagram!