“Why a bus conversion?”

It’s a pretty loaded question. Sometimes, the question is really pretense for “Have you lost your damn mind?” or “why would you quit your job and take your kids out of school?” I’ve tried to answer those sorts of questions in a previous article. If the question is more of a duality, “Why a bus instead of an RV?” well, I shall try my best to explain our fuzzy logic. As I can best determine, we bought a bus because of two major character flaws; an incredibly independent streak and a penchant for thrift.

Let’s not forget also, that we had no idea what we were doing.

The story of how we came to live in a vintage bus is really just a tale of ignorance. I didn’t know so many things, and didn’t even know that I didn’t know.

For the first thirty or so years of my life, I didn’t even know that you could live in an RV. I thought that everyone had a mortgage or paid rent on traditional housing. I thought that all those RVs I saw were toys, used sporadically for vacations, just driveway decorations.
One day, in a Facebook parenting group, someone asked where they could park their camper. They lived on the road and were coming to my area for an extended visit.

Lived on the road, in an RV.

I didn’t even know this was a thing.

I’ve never really been a rule follower, but traditional housing was not something I’d ever questioned. Once I realized there were other possibilities, my mind was spinning with options. The progression went something like this:

We could live in an RV in the town where I worked, instead of commuting three hours a day.

We could take our RV on vacation sometimes.

Every year, we spent a week at the beach in a rental cabin, we could go in the RV instead.

I worked remotely about 40% of the time. Could I work from the RV? From anywhere?!

While I thought incessantly about these alternate realities, my husband handled the practical aspect. I’ll never understand why he bought in to my crazy thinking and took steps to turn this fuzzy, not well-thought out abstract idea into a practical and possible plan. But he did. He’d told me, on a few occasions, how he’d love to buy an old school bus and convert it into an RV. Never really interested in RV life, I probably ignored him, but somewhere that idea was still in the back of my mind.

We started looking at the conventional options. Don’t laugh too hard when I explain my reasoning. I’ve already confessed that I didn’t know anything.

I started thinking about a towable trailer. Maybe something with a bunkhouse for all my kids. But we don’t have anything to tow it with. Do they make trucks that seat six? How much do those cost?!

So, maybe not a towable trailer. (See, I didn’t even realize that you can sometimes pull with an SUV or full size van).

Maybe a motorhome, then.

Not a Class B, we have too many kids.

Not a C either, it’ll have to be a Class A. What’s the biggest size? (Cringe.) How much does that cost?!

I easily and quickly came up with approximately 247 reasons why this lifestyle wouldn’t work for my family. Because, with four kids, we are obviously the biggest family that has ever existed (I didn’t know…). And I’d talked myself into thinking that only the biggest of options would even be viable.

But I’m cheap. Like, way too cheap to buy a brand new dually truck or a shiny new Class A. Plus, this was just a wild whim. We didn’t have a concrete plan for work, school, life. I didn’t want to spend a fortune on something that we thought we’d use, but never did. To be clear, I now realize that for full-timers, it’s unlikely that even the most brand-new, tricked-out fancy rig would cost what a sticks and bricks does. And even if it does, so what? If you can afford it, I think you should get whatever you want.

But we couldn’t afford it. And we weren’t full-time.

It was about this time that we went on our annual beach trip. We stayed in our usual cabin and way over there, on the other end of the park, was a short school bus with curtains hanging in the windows. A skoolie! I’d read about those during all my daydream research. And Marty had always said he wanted to buy one…hmmmm…

It was exactly at that point that we realized that a bus conversion was likely our best option. I was dying to knock on the door of that shorty and ask to see the inside, but I never did. I wish I could meet those people and tell them how their bus was instrumental in changing my life.

Anyway, so now we are all in. The beach trip was in October and we spent the subsequent months finding and following all the bus conversion and skoolie pages. We looked at buses for sale (online) and debated necessities versus nice-to-haves.

Once again, we were having a hard time finding the thing that was just right for us. Maybe the bus couldn’t sleep six, or didn’t have a bath and shower, or solar. We slowly came to understand that it was unlikely that we would find the exact perfect thing, pre-built.
We might have to make some changes ourselves.

How much work could we do?

In January, we found two buses in our area. One was a finished school bus conversion, maybe not 100% perfect for our family, but pretty close. It was an hour west of us. I made an appointment to go see it. The other bus was a greyhound conversion. (That’s a thing?!) It was an hour east. We made an appointment to go see that one too. The day before we were to see the skoolie, it snowed. Snow in North Carolina is borderline apocalyptic. We postponed our visit.

The next weekend was our scheduled visit to the greyhound. The snow had melted by then and we headed off to see it. It was monstrous – huge!

Built in the 70s, it had this retro vibe going. The seller had partially converted it. He’d added beds. At the back of the bus was the toilet and a sink, likely all the original plumbing from when this beast would barrel down the highway, full of weary travelers.

There wasn’t a kitchen. The wall was carpeted.

It was going to be a lot of work.

Yes, like complete and utter idiots, we bought the first bus we saw. We never even made it to see the lovely and already finished skoolie. We bought a 1978 MCI MC-8 and likely overpaid for it. We took the seller’s word regarding maintenance, without having records to back it up. We asked him to deliver the bus to our house because we didn’t know how to drive it.
We were so clueless.

So, ok, we’d bought a bus. It’s sitting in our side yard. Now what?

We’d stalked enough conversions to have a pretty good idea of what we wanted. Some of it would be hard because of the way the bus was laid out. We wanted to do the least amount of work possible so maybe we can work around these existing bunks and seats? Then we realized we needed to take out the beds, so that we could remove the wall carpet. And what’s this behind the wall carpet? Is that rot? Better check over here, too. Have the floors been insulated? Should we do that? I don’t think it was a conscious decision but, somehow, we ended up gutting the entire bus. Down to the frame. Because we wanted to do the least amount of work possible.

The conversion was completely and totally possible because of my amazing husband. He’s one of those handy-type people who can figure out how things are supposed to work and put them back that way. He’d saved our cars and dishwashers more times than I could count but he was clear that he didn’t know how to build a house. Or an RV, for that matter.

He did it anyway.

I would come home from my 12 hour day at work and he would show me what he had done to the bus. He worked tirelessly, about four days a week, for almost six months. On the weekends (or sometimes my remote work days), I would help. I painted the ceiling. The kids and I painted the walls. My oldest son (seven at the time), helped lay the wood floor. My husband would tell me that he couldn’t or didn’t know how to do xyz (wiring, plumbing, etc). So I would tell him to hire somebody. And then I’d come home from work one day and it would be done. He never hired anyone. YouTube saved us a fortune.

My husband literally built our home, all by himself. It’s kind of amazing. Especially when you consider that we didn’t know what we were doing.

Partly due to hippy tendencies, and partly reeling from the price of the bus, we reused and repurposed as much as we could. Our dinette is made from four of the original seats, still with the bus when we bought it. Our oak floor was salvaged, thanks to a friend. The kids’ bunk beds were made from the wood we saved when tearing out the previous build.

We started slowly, and changed our minds often.

Another benefit of doing it ourselves was the opportunity to make choices: bathtub or shower? Did we really need either? Bathroom sink and kitchen sink? Could one suffice?

Obviously, there are sacrifices to be made. You can’t fit a 2000 square foot house into a home on wheels. But doing it ourselves, not just buying something off the shelf, made the choices visible. Intentional. We didn’t just get what we got. We chose it.

We’ve been living, full-time, in our bus conversion for a little over three months now. It’s a little unconventional, but hey! – so are we. Are there things I’d like to change? Absolutely! And I can. Because we built this thing, we know we can make any modifications, upgrades and changes desired. You can do that in an RV too…I just didn’t know that then.

Why Travel Full-Time? To Spend More Time with Your Family, to Truly Live? One Family’s Journey into Nomadic Living 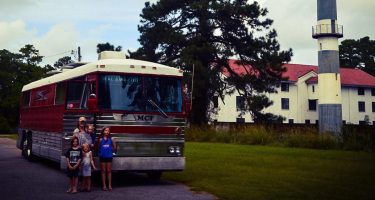 One family's journey into living on the road, in a vintage coach bus. 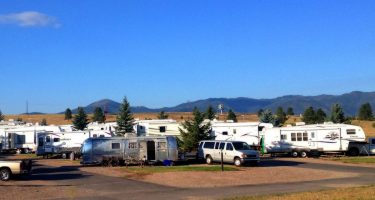 We cover every type of RV, including vans and travel trailers, and what they're like to travel full-time in + how to look through one when you buy it and so very much more! 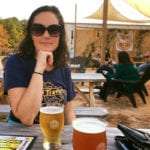 Stephanie K. Stancil has just embarked on a road-tripping adventure with her husband, and their four wild and wonderful children in their self-converted 1978 MCI bus.

An expert in technical training, she is a total novice at roadschooling, off-grid living and peacefully co-existing in 250 square feet.

Stephanie is learning how to align her time with her priorities and (sometimes) documents the family's journey on Instagram.