Music filled the car – it must have been something uptempo; I don’t remember what. I was in Muncy, Pennsylvania, scooting around in my seat to the beat, five hours into an eight-hour drive to Pittsburgh. The two-week high I had been on since starting my road trip was still going strong. My 26-year-old car seemed like a stallion in its prime. My mood sat somewhere above the stratosphere. Everything was going swimmingly.

I looked down at my atlas as I rolled slowly towards a stoplight leading to the on-ramp of I-180 East, noting the next few turns and exits on the route mapped out in purple highlighter. When I looked up, I was inches away from the back of a silver SUV. A cry of “No!” climbed up my throat, and I slammed down on the brakes, my hands flying up in alarm.

Glass shattered. The hood crumpled. Radiator, I thought. Frame. Headlights. FUCK. No no no no no. The woman in the SUV jerked her hand towards the on-ramp, and I pulled in behind her in the breakdown lane.

Shaking, I got out of the car. It was not pretty. My driver’s side headlight was smashed. The hood was folded up, boasting a small ridgeline. The front end was clearly bent. But miraculously, there was no coolant on the ground. The radiator, though no longer straight, had survived.

The woman got out of her car without looking at me, cell phone to ear, and surveyed the damage to her bumper – some of my car’s blue paint, and black scuffs from my bumper.

“Are you calling the cops?”

“How does someone not see a car stopped in front of them?!” 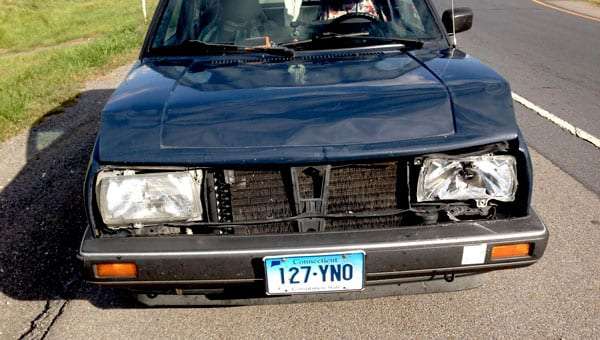 I didn’t bother telling her I hadn’t been watching the road, that I had looked away for all of two seconds to consult my map. All I could do was apologize again, and curse myself silently over and over. Asshole, I thought as I pulled off Dusty’s cracked grill and deposited it on the passenger seat. Asshole asshole asshole.

The other woman, also named Amanda, looked like she was in her early twenties. I had been about her age when I got into my last accident some seven years ago, my car’s chassis meeting a guardrail while I changed a CD.

“Here, they want to talk to you,” she said, handing me her phone.

The officer on the other end told me that since we were both unhurt and mobile, the police would not be dispatched to the scene. We were to exchange information and be on our ways.

“Did you tell the other driver that?” I asked.

“I can.” I handed the phone back to the other Amanda. She was crying. When we exchanged information, I assured her that the accident was my fault, and that the repairs would be taken care of.

“Look at my car, if it makes you feel any better,” I said.

“I don’t care about your car,” she informed me through her tears.

It was just after 5pm. I had a few hours before sundown, so I fixed myself on getting to Pittsburgh. I drove the three-hour trip without stopping, crying, degrading myself, calling friends and family over Bluetooth, pulling over to tie down my hood with a piece of twine. The car didn’t overheat, but it did make a terrible, scratching squeal when the radiator fan came on. As the sun dipped below the horizon, I saw that although the headlight was smashed, the bulb was still intact. Dusty was wounded, but driving just as she had before the accident.

I spent the next afternoon in Pittsburgh scouting out body shops. The first one quoted me at $3,500 for a straightening, new radiator, radiator supports, hood, headlight, and so on. My tears returned. They recommended a smaller shop up the road, Petraglia’s.

“I know,” I said. “It’s just that I’m driving across the country. Don’t take it personally. I’m okay.”

After consulting with my dad on the phone, the two settled on a plan of attack: Robert would straighten out the front end, keep the radiator as it was, and tie the grill back on. My job was to find a hood and a headlight.

Pittsburgh, the city of steel, shipbuilding, and automobiles, is an ideal place to find parts for a 1988 Volkswagen Golf. Battaglia’s, a junkyard on the South Shore, had both a hood and a headlight for $175. I was in Lawrenceville, five miles away and across the Monongahela River, and they wouldn’t accept payment over the phone. I didn’t have the energy to try navigating the bus system, so I walked. That evening, with the parts ordered and Dusty’s repairs set in motion, I sat down to a Yuengling and a french-fry-and-cole-slaw topped Reuben at the downtown Primanti Brothers. I hadn’t eaten for 24 hours, and it was heaven. Someone told me the sandwiches were ergonomically designed for truckers to eat while on the road.

The accident set me back $600 and earned me a few extra days in Pittsburgh. And it’s strange to write, but I’m glad it happened (sorry again, other Amanda). It could have been much, much worse. I could have checked my map on the highway and smashed into the back of another car at 65 miles per hour. Dusty could have bent in two with me inside. Under different circumstances, I could be dead, or I could have caused the death of others. My trip could have ended then and there, only eight hours from home. The whole ordeal was a wake-up call, and good thing it happened sooner rather than later.

The night after the fender bender, a woman in a bar shook her head as I recounted my lesson in distracted driving. She told me of her friend back home in Erie, Pennsylvania, who had just died in a car accident. She had been on her way to pick up her five-year-old son when she texted her husband that she would be home in a few minutes. She never made it home.

In my travels, I’ve noticed how truck drivers communicate with one another on the road, flashing their headlights to other passing trucks once they have enough clearance to merge back into the slow lane. Imagine if we all drove with such reverence.