We recently got two interesting emails via the World Wide Web (you know it’s international now, right?) that brought up some juxtaposing but perhaps interesting points.

The first was “Looks like you’ve been on the road a long time. Don’t you ever get bored?”

And the second mentioned something along the lines of, “I guess I’m not a full-timer because I rent a house for a few months every winter to go snowboarding.”

To answer the first…actually, yes, it does at times get boring.

I was incredibly over the mode of transportation Tristan and I first used–a big ol’ 28′ RV–after the first year. I found it difficult to drive, I hated “packing up”, and I found we couldn’t camp in the places I wanted to…namely national forests.

About 9 months into living in that, now with Tristan, myself and Renee all on board, I started finding it difficult too. The Bus needed a lot of repairs. Renee and I were in a very fresh relationship and frankly, I just wanted to stay in bed and have sex all day…not always that easy with such a small home-on-the-road and a 9 year old aboard. We didn’t get out of the Bus then by choice, but several months later found ourselves pregnant with Winter…and so rented a house on the beach in Manzanita, Oregon.

That lasted about nine months and we were back on the road again.

We’d later do something similar in a treehouse in Asheville, North Carolina, while cooking Wylder.

I recently got sick of the Airstream we “upgraded” to after Wylder was born, to make room for all of us + our Nanny Doo (Renée’s mom)…once again, it felt too big, we were limited as to where we could camp, and had to make a mad dash for campsites if we planned to be anywhere cool on the weekend.

At the same time, looping around the US, after six years or so, felt like we weren’t doing anything new. Thus, we headed to Mexico.

But I find the other question even more interesting. It wasn’t a question, really, but a pondering.

What makes a full-time traveler?

I guess the short answer is, “anyone who travels, full-time”. Maybe you have a home and you just never go back to it. Maybe you don’t have a house at all. Maybe you live in an RV or a van, or maybe you just rent a new apartment somewhere different every few months or so.

The best answer, I think, is though…who cares? What does it matter if you’re full-time or not? Traveling should be about fun, not a contest of who does it the most or the longest.

So with that, I’ve opened up the old Illustrator and slapped together this little timeline of our life and travels. We’ve lived in rentals of one sort or another for 22 months total out of our nearly 7 years on the road. I think that’s about 26% of the time. I consider us full-time travelers, but you can call us hippies or a monkey’s uncle, whatever you’d like!

The important thing is that you’re figuring out what makes you happy and then hitting as many (or as few) roads as that requires!wandrly-timeline

A brief look back at over five years of location independence. 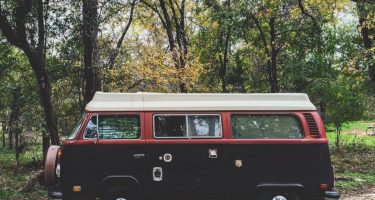 A few words about our good mother bus, Champ.