We took the first left into Saranac, home of the similarly-named craft beer, and parked in the first on street parking space available.

I exited the Bus as Lady began promptly releaving her boob from its blousy chamber to feed a ready-for-lunch baby who’d proved himself to be a dream traveler over this past week (though while he was apt at the actual traveling part, the setup in campgrounds left him a bit short of earning the title “happy camper”). As I stood outside Bus’ barn door and watched locals get derogatory over smokes and beers at the Waterhole, an extended cab pickup pulled up into the parking lot space beside me. “That’s what I want,” proclaimed the late 40-something woman, a red headed bob cut and a smile on her face as she motioned her head toward the Bus. The sticker on her truck proved enough fact to me to declare her the owner of what surely would have been our night’s hangout, were the Lady and I without an infant to attend to, and upon further questioning she reassured me not only of the fact that she was indeed the owner of the Waterhole, but that it was also a-okay to wield a child inside were we to find ourselves a little thirsty.

Alas though, thirsty as I was, we had a town to explore and good local brews would need wait until nightfall at our campground (wherever that may lie). I strapped the baby on and Lady and we toured the old town, frequenting tourist-like the general stores and hippy shops along the way. Upstate New York’s Adirondack villages love to boast dreamcatchers, tapestries and other oddities simultaneously hippy and medieval. A few photos, several blocks and some Bus love later, we’d down the town, made the rounds and as I withdrew the atlas from its holster, Lady agreed that no better a place to find the local scoop on a campground we’d find than this, the Waterhole, and so we exchanged proof of age and ten dollars for two beers that we could soak up a little summer’s worth of porch and find ourselves the route to Meadowbrook Campground, a grove of trees of a place halfway to Lake Placid that would prove a cozy enough place to play guitar strums Winter to sleep and cook a can of beans over our campfire.

This is the most beautiful place we’ve seen thusfar in our of recent travels, natural food stores, friendly locals and frequent flora to boot, and I’m excited to head tomorrow finally officially into New England. 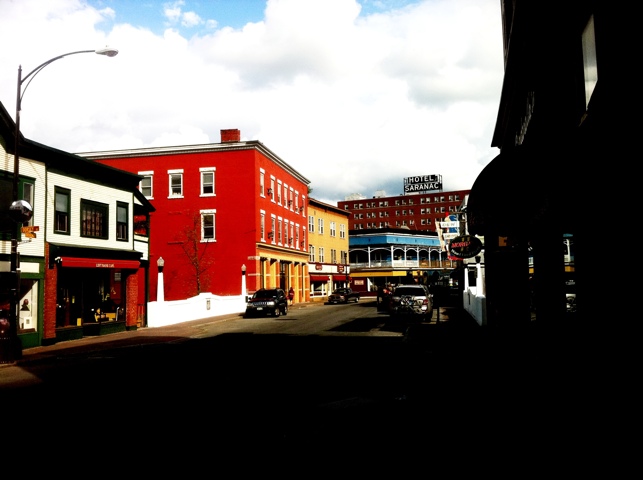 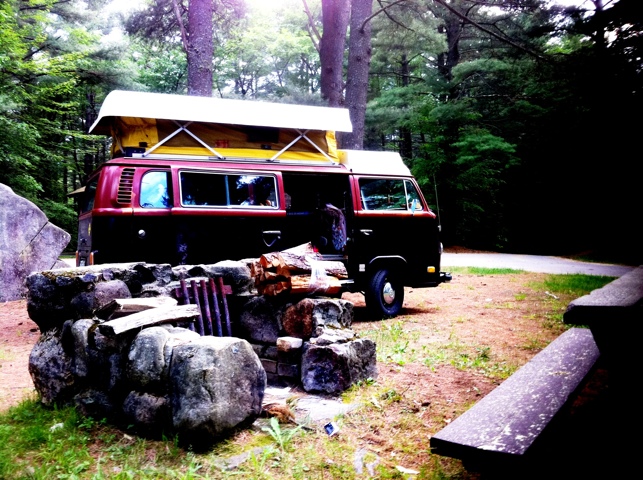