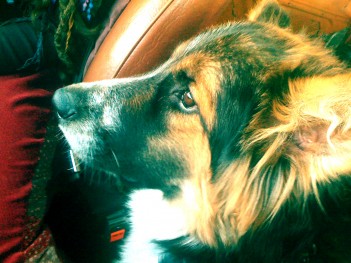 Cottonwood, Arizona sat shopping mall sprawl just East of Jerome. Your typical big boxes, peppered though with antique stores galore where one could find tarnished turquoise and silver jewelry or post cards from around Arizona and beyond, vintage of course, as much as their heart desired. But in the thick of Cottonwood’s development was Old Town, a single quaint street with a bar, more antique stores, two cafes and the Sundial Motel. Meanwhile…

The fire blazed up, handmade as always without the aid of starters or much else other than the leftover six pack holster from our beers and what wood we could muster in the area, and the Lady and I sat around in our usual dreaming, plotting, planning out a life and living it all at the same time. There’d been big talk of picking up a puppy, and failed attempts at local shelters from Bisbee to Phoenix to our current situation, quite nicely situated I might add, in a little campground spot in Dead Horse Ranch, a few miles from Old Town Cottonwood. We’d visited the local shelter in town earlier that day and though we were dead set on finding a young puppy, it was becoming obvious that doing so was a feat at best in shelters. Most of the dogs were older, scrawny little stragglers who’d already spent most of their life story roaming these streets of Cottonwood and the surrounding towns.

Back at the shelter, a single hallway lined on both sides by cages with dogs ranging from feisty miniature cocker spaniels to enormous sheep dogs and wily streak white husky wolves, we walked the thin row all too reminiscent of a scene from the Green Mile, eyeing every pup and dog available.

One particularly large, but still technically a puppy, beast of a dog lept up on the cage as Lady walked by, his paws the size of my palms, his coat thick and shining black, long, with the face of gentle German Shepherd and his jet black tail tipped with white like a fox. She mentioned him to me. We kept walking.

Now around the fire, this night, she thought perhaps he was the one. Whatever she wanted would be what we would get, and I didn’t push or pull one way or the other. Before the beers were gone, before the fire had died out, we’d already decided he was the pup for us, and his name would be Deputy.

We paid $105 to spring Deputy Dog from his puppy prison, which included the mandatory nudering which neither of us were keen on but the wolfy warden would have none of us taking us with him without the operation.

Taking Deputy out of his cage to get familiar with him, he chased around a tennis ball I threw while Lady talked with a worker about his past. It seemed they’d found him wandering along the streets at 2 months. Five months later, here we were. One of the shelter workers had nicknamed him “Duphus”, his official shelter name was “Chester”. Neither would, of course, do for our soon to be wandering mutt.

They didn’t know his breed, but best guesses were at part German Shepherd, part Border Collie. Most black, coal black fur, shining as crimped white strands and spots occasionally peaked through, his face had spots of brown. Lady fell in love with him immediately. I took my time. He was, to me, at first, not much more than another mouth to feed, another obligation, but she loved dogs and presented me with grand visions of a hiking companion, catching frisbees on some distant beach, a friend for life.

We picked him up after his operation, and he was meager, small it seemed, cowering between our seats in the Bus full of pain killers and lacking his former manhood. He seemed to like sticking his face underneath the Bus’ pedals. I pushed him back, he would stay for a moment and then begin inching forward again.

After some recovery time, though perhaps not nearly enough (but as a dog of Bus-dwellers, he should realize that recovery times are short in this life), we took him hiking through Sedona. He lagged heavily, having a hard time on the slick red rocks lining nearly every trail in Sedona’s remaining wilderness. He finally broke down just a half mile from the Bus, and first I tried carrying him but realized that he would need to be pulled, forced back. He climbed up into the Bus and took his spot between us, fast asleep and on the road.