I left for my cross-country trip on Saturday, August 23, a day so rife with serendipity I knew the cosmos were sending me off. It had been months since I felt that click, that atmosphere of magic that descends when you do something out of the ordinary, something brave, or foolish, or honest. I had forgotten that such a realm existed, that the universe can wink at you, that the world is an orchard of low-hanging possibility when you step outside the familiar.

Someone was honking at my left. It was 9:30 in the morning on August 23, and I was stationed at a stoplight in Wilton, Connecticut, waiting to turn onto Route 7 on my way to Vermont. I turned and saw my dear friend Jing in her dark blue Suzuki, waving at me as she drove past on her way to work at a nearby farmers market. I had said goodbye to her and most of my other friends a week before at a delectable dinner party, and our paths just happened to cross at this intersection.

I pulled into a gas station about a quarter mile up the road to check my oils and fill my tank. This was it – I wouldn’t be stopping until I took a break from driving in upper Massachusetts. Route 7 was busy, and I scanned for an opening to merge back into traffic. That’s when I saw her – my car Dusty’s twin, an old, dark blue Volkswagen Golf, heading in my direction. When it pulled into the gas station, I tapped my car into reverse and pulled in beside it, beaming at the driver, a crinkly-eyed, middle-aged man. 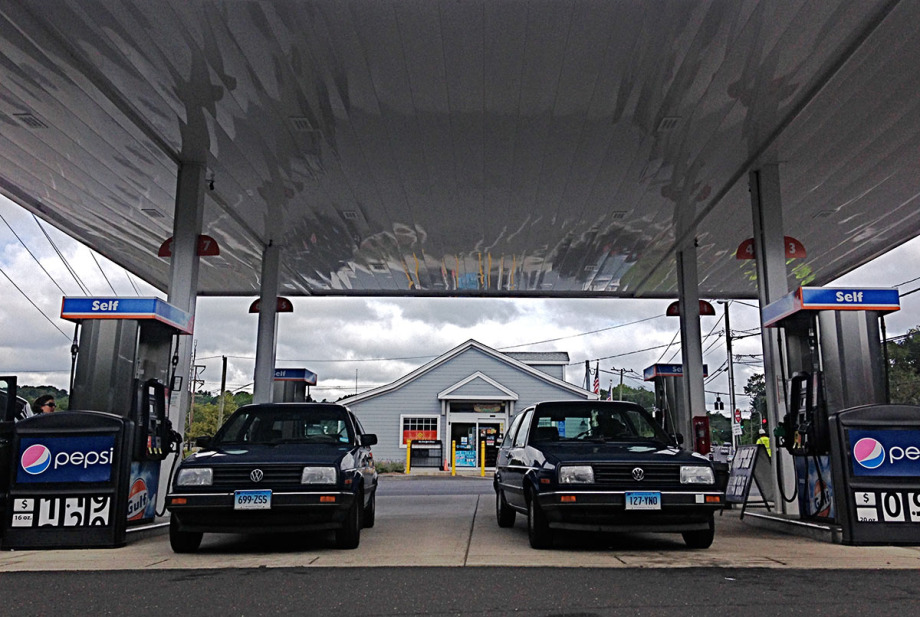 In Vermont, I stayed with Patty, my mom’s friend from college, and her husband Pete, farm manager and history teacher at The Putney School. It was the first time I had seen them in nearly twenty years.

Patty and I stopped at her therapy practice in Saxtons River before heading to her friend’s 90th birthday party up the road. She grabbed the coat we had stopped by for, and I wandered over to her sitting area, where a coffee table housed a miniature sand garden, a dish of Angel Cards, and a deck of Medicine Cards, which feature 52 animal illustrations and a book of accompanying stories for each. Before choosing from the deck of Medicine Cards Patty had fanned in her hands, I thought how fitting it would be if I pulled a deer or fox – you could call them my spirit animals.

I pulled the Deer card. The accompanying story told of Fawn, who heard the Great Spirit calling to her from the top of Sacred Mountain. She began to climb, and encountered a fierce demon blocking the path to the Great Spirit’s lodge. Fawn’s love and compassion melted the heart of the frightening demon, who shrank down to the size of a walnut.

After the birthday party, we headed down the street to Pleasant Valley Brewing, a small pub. Patty’s friend, a bass player, was performing that night with his cover band, The Living Roominators, and the bar was packed to the gills.

We sidled up the bar to order a drink, and the man at my left scooted over to let us up to the counter. I did a double take.

As I was ironing out my itinerary in the previous weeks, I had used the hospitality exchange website to arrange a stay with Ryan and his family in Brattleboro during the first week of September. My plans changed and brought me to Putney, about 20 minutes north of Brattleboro, the week prior, so I thanked him for his offered hospitality, cancelled my stay, and hoped for a chance to meet up while in the area. That chance arrived when Ryan decided to stop by Pleasant Valley for the first time that night, after driving by countless times on his way home from teaching in Westminster.