“It’s the off season, man,” he nods his head, a bit, pushing his shoulders forward and biting his bottom lip behind mirror black sunglasses. “So I tell you what, I’ll give you the half rate.”

I’ll admit that initially, I didn’t believe him. His pitch was that he needed five dollars since we’d been parked here in a dirt lot at the end of the rickety but perfect fishing town of Placencia for the past few hours. I hadn’t seen a sign when we parked, so I had my reservations, but I didn’t mention it.

Initially, I thought he was just a guy asking me for money. Not an entirely uncommon perception in these parts. Later I’d be told by multiple upstanding locals in the community that the man was indeed the one–and absolutely the only–man who I should ever pay to park in that lot. Happy to admit my wrong, and now knowing we’ll be staying for awhile, I say hi the next time we meet.

He ends up settling on $35 for two weeks. That’s the off season rate (feel free to do the math).

Depending on who you ask, “off season” could be any time of the year, but having been here on and off for the past two literal seasons, I’d wager the only real off season is September and October, maybe into November.

Why? Summer is hot, but it’s also when plenty of Belizeans, Mexicans and other travelers have time off from work or the kids are on break. Despite what your Uncle Donald may have told you, too, plenty of Central Americans have the ways and financial means to vacation in their own beach towns.

All winter long, one can imagine the troves of tourists being delivered by airplane, cruise ship and even overlanders looking for a little more English and jerked chicken in their lives (if only for a guilty moment). Spring breakers can’t have simply decided to skip Belize altogether. And so, we’re left with Autumn.

There’s infinitely more value in visiting a place in the off season than just saving money, though I’ll touch on that more in a moment.

The real treasure shines in the freedom from crowds and your shot at being treated a bit more sincerely than someone who’s clearly just here for a week on vacation. They go hand in hand, really. Smaller crowds mean you’re not just a passing ship in a fleet-drenched sea, you’re a docked sailboat seen lonely and easily all day long.

The locals aren’t in hustle mode. Everyone moves a little more slowly, plenty of time for long conversations between their less encumbered daily routines. You can still get a drink, it’s just that now, you can get a complementary bartender’s ear on the side.

Along with the diminished source of income and slower pace of life does come a slightly more ghost town effect. Hotels, restaurants, tour guides…everyone deserves a break from working the Caribbean life and sometimes that means places will be closed for a month or so. Does that mean you miss out?

Everywhere doesn’t close all at once, so kick off your sandals, bask in the cool autumn breeze blowing away the last of the truly hot summer days, and enjoy some free (or at least cheaper) time with your thoughts.

We could all use a little more internal dialogue in our lives.

Speaking of cash though, yes, that’s a perk too.

The real world deals we found typically involved lodging. In Caye Caulker we got a $249 / night house (an entire house, with a pool, A/C and blazing WiFi) for $99 / night. Still on the high end, but for a family of five on this expensive little island, we thought it was worth it.

In Crooked Tree, a bird sanctuary home to a rainbow buffet of extraordinary feathered muppets, we were discounted half the usual night’s camping rate and had the entrance fee eliminated to boot. $15 USD a night for five people next to a pasture / wetlands full of roseate spoonbills, wood storks and jabiru? I’m happy to pay that.

“Belize is an expensive country,” they say (and they do say it). Compared to Mexico, yeah, it is. Contrasting a bottle of wine in MX vs. a similar one in Belize, what costs the equivalent of $7 US even in expensive Mexican cities will run you $17 American dollars in Belize. The quality of things is even far better in much of Mexico, but still it’s cheaper.

For example, you can find a great Bloody Mary in Mexico easily for $3 US, and one of lesser quality in Belize will run you at least $6. For an average beer, compare Pacifico (a “premium” beer in Mexico) at around $0.75 to Belize’s prized Belikin which seems to go for around $2 Belizean (it’s a constant 2 Belizean dollars to 1 US exchange rate, and most places take US bills…one very nice thing about Belize). Milk is worse. Cigarettes are a $1 more. You can’t find good produce (except in San Ignacio, where the market in the middle of town has clearly scored the entirety of good plant life in all of Central America).

All of this aside, while Belize can be more expensive than Mexico and Central America in general, it’s still cheaper than places like the US, Canada and Europe. Your money goes 1/3rd or so further here, and maybe twice as far in the off season.

I write this from the small deck of a cabana–equipped with two beds, a hot shower, flushing toilet and basic kitchen–that rests right against the Caribbean. Every day the sun shines and we can put the kayak out onto those azul waters, we see manatees and sting rays, flying fish and jumping dolphins. As evening comes early in the autumn, so does the breeze whistle in softly, cooling our world and dissipating any chance of sand fleas or mosquitos bothering us. An ocean front home, daily cleaning service, a minute’s walk to fancy restaurants or dive bars, free kayaks and bikes, for five people…$51 a night.

We’re soaking it up. Can we afford to pay $51 / night every night of our lives? Absolutely not. We made due with free camping in the country to balance things out, and if you’re traveling in a van or RV, the average cost for one person, just about anywhere, is $10 Belize per night. That’s a $5 USD budget per person for anything from boondocking in jaguar jungle forests to you and a 12v plug next to the bathroom of a roadside restaurant. Off season pricing, mind you, but the best season too, if you ask me.

Back in Placencia, I end up having a daily report with the guy running the dirt lot parking at the end of town. We exchange “whatups?” as we pass on the sidewalk, or a few words and a fist bump in front of the grocery store. He quits asking me for money to park in the lot and instead just walks up to me as I’m paying for groceries and throws in a beer or two.

“Put that on his tab, we good,” he says as he walks out the door, back on his always-sunglasses way.

During a particularly longer chat at one point, I’m glad I hadn’t mentioned the sign for parking.

Just a few things we've discovered that you may enjoy in Placencia as well. Looking for a cheap place to eat? The Pickled Parrot (between the sidewalk and main road in town) has $10 Belize (so, $5 US) lunch specials every day that they’re open (6 days a week). They’re also a great spot to watch just about every NFL game.

The best sangria we’ve ever had, anywhere, is made and served at a restaurant by the name of Mojo, complete with a little second story deck that’s perfect for watching town go by.

If you’re looking for affordable accommodation, we fell in love with the Tradewinds beachfront cabanas. After getting a weekly discount, the price for ocean front luxury was just over $50 / night (off season, mind you!) If you’re overlanding in a van, truck camper, RV, etc., check out Mariposa…it’s an amazing luxury beach resort that, while offering high end, expensive rooms, allows you to camp in their parking lot absolutely free! Well, you have to eat at their restaurant, but it’s still cheaper than just about anything else you’ll find in town.

Except, of course, that you can drive to the pier at the very end of town and find a guy named Baker to chat with, and for $5 Belize per night you can camp right there in the parking lot.

Placencia is also full of great places to eat. Look for Rick’s on the sidewalk for what might be our favorite selection of inexpensive eats, or head back to Mojo or Rumfish y Vino for a real date night type experience.

Finally, ask around about Jaguar Lanes…expensive, but incredibly fun, bowling. Get there in the early afternoon if you’d like to ensure you get the lanes all to yourself.[/posterboard] 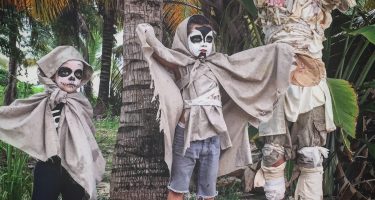 Festivities for adults and kids, including costume contests, parades and free jello shots! 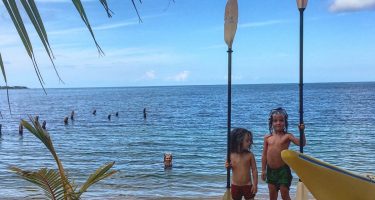 Get free kayak rentals with an affordable stay at the Tradewinds cabanas in Placencia, Belize.