My friend “B.” asked me for food recommendations in Kuala Lumpur, Malaysia.

I had none. Even after living there for five months, I knew little about going to restaurants for food, though the local cuisine was amazingly delicious.

This brings us to another change in our lives. As a family, we began our journey into veganism in Kuala Lumpur. Why? Well, traveling as we do, vegans and vegetarians are the majority of people we meet, and so we yielded gladly.

After two weeks in Thailand’s jungle, we moved by train and bus to Kuala Lumpur, this huge city, but more specifically in neighboring Negeri Sembilan, on the city’s periphery. We arrived at 5am, after a 20 hour journey, to arrive at a Chinese temple on a verdant hill by the name of Sak Dato, and then further down into the Broga neighborhood to another two-story temple.

This building was known as “Home for the Angels”, our destination. We knocked, but nobody answered. We heard voices and the lights start to turn on. It wasn’t until half an hour later, still only 5:30 in the morning, that Yi Shing opened the doors and welcomed us. We waited in the reception for Principal Lee.

Our role was as volunteers, offering art workshops in English to kids in this orphanage which practices Confucianism, with Buddhist and Taoist influences. They cultivate themselves as vegans: not killing, causing no suffering, no damage; they don’t consume either garlic, onion, tobacco and some other vegetables, and no alcohol or stimulants. Men and women sleep, eat and pray separate from one another. Prayers are twice daily, at 6am and 6pm, and then for thanks before any meal.

So, what did we eat?

The diet is based on white rice commonly cooked on a vaporizer. Veggies and fruits are very accessible and the portions are huge. In the markets, the meat supplements are incredible and made of mushrooms, tapioca, soy, tofu and so on. My philia to the fungi kingdom started here. Every day we ate at least two different species of mushrooms and, once, I found a Ling Zhi (Ganoderma Lucidim) “the eternity mushroom”, in the park just in front of our home.

Two “aunties” cooked everything with the children’s help. These days they cultivate several fruits and vegetables for their own consumption. 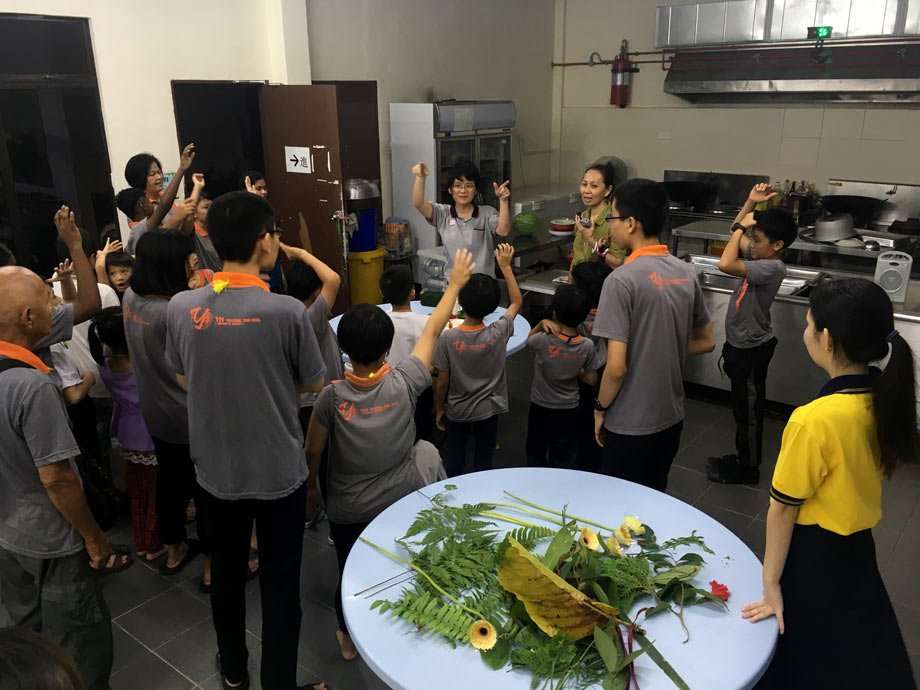 A month later we left, heading up to Vietnam where the food is great–and cheap–but we didn’t know what to ask or even necessarily the names of what we’d been eating. Which is how we once ended up eating dog meat. I realized it a week later when on the street I saw the dogs roosted as chickens and I recognized the meat.

This just further cemented my decision not to eat meat anymore, not to be involved in the killing of animals.

Three months later we were headed back to Home for the Angels as we were evacuated from our then home of Cat Ba Island due to COVID-19’s arrival there. I made a personal commitment to continue my veganism as much as possible, and to avoid any animal products, though this proved tough with eggs, honey and cheese.

In Malaysia this was easy–Vietnam was a different story–and food was abundant every day. You must always finish all your food, not a grain of rice can remain, and it helped that the vegan food they prepared was super delicious. We learned all the Chinese rituals, prayers and behaviors, especially those related to meals and tea time. Till today my son Luka and I have remained at least vegetarian, though my wife Gina is more open to eating whatever.

As we returned to our native Mexico, well, to be a vegetarian is a privilege. It is expensive or simply difficult in some areas, and to avoid cow derivatives or eggs seems impossible. Still, we managed to decrease our garlic and onion intake for health and personal reasons.

But maybe one day I’ll tell you about “Durian”, a particularly tasty, smoky and stinky fruit that defines Malaysia. In the meantime, if you want to spend time helping in this country, they’re very open to volunteers and as such, the opportunities are endless.

Before all of this, I never thought about becoming a vegetarian. Non-meat eaters always respected my diet and so I did there’s as well. If you feel like you want to become a vegetarian, vegan, non-meat eater, etc. just go in your rhythm, it’s your path, your ride and it will be great. By reducing our animal products we can balance our life.

My gratitude goes out to Principal Lee, the Home for the Angels team, and all the people that help to spread their messages consciously and form the heart.