We have lived for years at a time without a toilet.

Or, perhaps more precisely, without our own toilet.

For the ten years or so we’ve been traveling, around half of that time has been spent living out of a van, and a van only. We never bothered with installing a shower, indoors or out, and relied on gas station, restaurant and other public toilets for the majority of our needs. We’re a family of four boys and their lone mama, so peeing outdoors has never been a problem. An inconvenience, particularly in the middle of the night, for sure, but never really a problem.

For the rest of those years, we’ve either lived out of our Airstream–which had a working bathroom with holding tanks–or the occasional rental somewhere nice. To say we wouldn’t prefer to have our own toilet would be a lie, of course, but the minimalism of vanlife and the possibilities it provides has always been, in our opinion, well worth the trade off.

We now find ourselves living out of that same Airstream for the winter on a piece of land with no septic system or other connection to public sewage, and required a solution that didn’t involve us driving the Airstream to a dump station which, in the middle of winter at 9000′ in the Colorado Rockies, is not really even an option. Thus, we hooked up with a composting toilet.

Yes, they are. More disgusting than your usual experience, anyway.

The typical session with one of these bad boys is nothing particularly strange. If you want to poop, there’s a lever you pull that opens a trap door into the pit of doom. You do your business, wipe as usual and can even discard your paper down in there if you’d like. We actually just toss ours in the garbage, something that we learned in Mexico that is also less of a gross out after you’ve become used to it, but since normal toilet paper is just thin wood, it will most definitely compost.

When you want to pee, you make sure that trap door is closed and just pee into it as you normally would, from whatever sitting, standing or other position you’re accustomed to. The pee is separated from the brown stuff, into its own jug we affectionately call the “pee jug.”

You can clean the bowl quite similarly to how you would any other toilet, though there’s no water in it so you need to provide that with a little spray bottle or something, but otherwise things are normal if this is your primary experience with the compost toilet.

Of course, if this is your main interaction with the toilet, you are not the suckerfool father, mother or better half who ends doing the dirty work.

How Often Do You Have to Clean It?

This is where the “more disgusting” comes in. If you’re like me, the guy who’s somehow been designated the compost toilet man, the one who empties out the various contents that pile up in there, then yeah, it’s pretty gross.

Our family of five fills the pee jug up about once a day. Let that yellow mellow any longer and it’ll start to leak out of the bottle, into a little catch basin, or even worse, sometimes into the shit bucket. We fill that up once every two months or so, and while dumping a jug of pee out is not exactly fun, cleaning a big tub of poop is a serious contender for “literally the worst.”

This is one of the main flaws of the concept behind compost toilets: most people will fill it up far faster than the year or so it takes to truly turn into compost, and even if somehow you did poop that little, you’re constantly adding new shit to the pot. When it’s time to empty it, unless perhaps you leave it in a cabin for months at a time before doing so, it will have recognizable, stinky ass shit in it.

Where Do You Dump It?

For anyone traveling with one of these, this is the real question.

We happen to have a septic holding tank where we can dump the pee. When you’re outside just peeing here and there, now and again, in the woods or whatever, I have no issue with that. I love peeing outside. But when you’re dumping 2 gallons of pee at a clip, doing so all in one place stinks, and doing this anywhere other humans will tread feels wrong to me.

You could take it to an RV dump, but since you aren’t using a standard sewer hose it could be awkward or, worse, the owner of said dump station could just say no. You could dump it in the woods somewhere far from other humans, but still, a bunch of concentrated pee in one spot is wretched. Which leads me back to why I will likely never use one in any traveling we do–as we’ll either have a van, and not bother with having our own toilet at all, or an RV with a more realistic setup to begin with.

As to the crap bucket, well, that’s a whole other ballgame. Where do you dump something like that? We have a dedicated compost bin, so it’s not an issue for us, but were you traveling, this stuff would be impossibly difficult to get rid of short of bagging it up and tossing said now very heavy bag into a dumpster.

You’d make a massive mess at an RV dump, no doubt. The outside of the thing gets nice and gooey too, if you were wondering. You absolutely cannot just dump it in the forest and walk away thinking, “Well, it’s compost!” That would be illegal nearly anywhere in the United States, and even if you’re down with digging catholes when you camp, this is an amount of human sewage not fit to ever simply be chucked back into a four gallon hole in Mother Nature’s complexion.

I suppose you could seek out gardens or some other compost bin, but how often do you want to call someone up and say, “Hey, you like flowers right? Can I dump a bunch of my shit in your compost bin?”

What are Compost Toilets Good For?

Well, I’ll tell you that I’m glad I haven’t had to walk outside at night to pee here this winter. It’s pretty cold and, no lie, we’ve had snow piled up 8 or 9 feet high for long stretches this year. There are also no facilities open after 7pm or before 7am, so it’s nice to know that should I require an early morning deuce I have options other than finding a bag and squatting.

If I was a single guy, I may be able to look past some of the shortcomings mentioned above. If I had a cabin I visited on the weekends come summer, fishing pole and orange camo ballcap on my brow, looking to put back a few Busch Lights and snag dinner out of the lake, then I could see it lasting all summer long, only needing to be dumped–and being sufficiently “composted” perhaps–the following spring.

For travelers, though? No, I don’t believe it’s an enjoyable option. Even if you had a large rig and could stow it away and only use it for emergencies, just having a small bucket that you stick a bag in and toss the whole situation when you’re done once in awhile would make more sense.

Should I Replace My RV Toilet with a Compost Toilet?

I assume this question is being asked by someone who is in the early stages of absolutely loving the environment and wanting to protect it and whatnot. I was once a person like that, and I still love nature and birds and trees I think more than the average bear, no doubt. But I don’t believe disposing of human waste in the way these things tend to encourage is better for nature than flushing it all down a toilet into some cess pool where all sewage kind of belongs these days.

Yes, I think that composting our human waste and then putting those nutrients back into the soil is good for our planet. Yes, I think most people will never allow this stuff to compost fully and will therefor be struggling to find ways to get rid of it, and many of those people will likely resort to less than sanitary methods. Certainly, even if you’re just bagging it up and tossing it into a dumpster that’s worse than flushing your sewage away; that bag will just sit for some eternity in a landfill, a month’s worth of last night’s lasagna now taking up space on our planet for ages.

But, Do Compost Toilets Smell?

If you’re still dead set on a compost toilet, and the only thing holding you back is whether or not they smell, then I have good news.

Our Nature’s Head doesn’t smell at all, when no one’s using it. 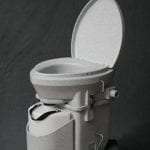 You’ll pay the same if you purchase the toilet from Amazon or Nature’s Head’s own website, despite Amazon’s free shipping should you be a Prime member. However, we’ll get a little kick back from Amazon if you buy it through our link. ;) It’s also worth getting a spare pee jug, just in case, and note the difference between the handles: the “spider handle” sticks out a little less far, for tight situations.

When you empty the pee jug, that smell permeates the Airstream for twenty minutes or so. When you empty the shitter, yeah, that wreaks. But as long as you keep the trap door closed and the lid down, given that this particular unit has a DC fan connected to an exhaust tube which sucks odors outside, there is really no smell, at least nothing more significant than what you might experience during Uncle Buck’s infamous Hail Mary drops anyway.

At the end of the day, I look at this whole thing as an interesting experiment into the world of secondary septic situations and nothing more. I will replace the whole thing with a normal RV toilet as soon as our septic system is completed this summer. I like RV toilets because they have no bowl full of water to waste, no tank to go running on endlessly. I’ll also hook it up as a single tank system, since this particular RV will never be used for travel again, the normal flow of greywater from the sink and shower will wash away any solid that might otherwise accumulate in a typical greywater / blackwater situation.

If you’re looking for a decent toilet setup for your van or truck camper, though, I would sincerely research what it would take to get a more RV-like system setup than investing in a compost toilet.

Or, just be the type of person who convinces your significant other to take care of the rigamarole side of things and go on chugging your kumbucha, kiddos. Either way, it never hurts to practice your aim. 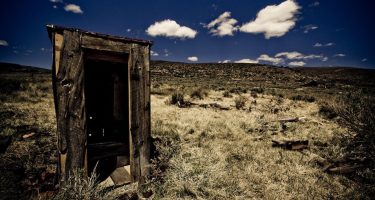 Where to find hot, clean showers and how to relieve yourself for those travelers who have no built-in shower and bathroom.

Free Camping in the National Forests of the United States 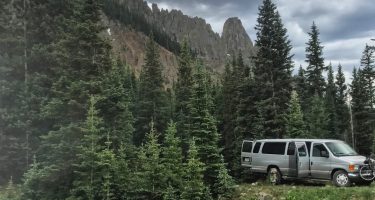 A thorough guide to camping in national forests. Sorted by state, awesomeness, and more stuff the camper in you will love.